In 2006, Rob auditioned alongside 40,000 people and was selected to become one of twelve competitors on the prime time BBC1 television show ‘Strictly Dance Fever’ (Britain’s version of ‘So You Think You Can Dance’) Upon completion of the show, Rob joined the cast of the stage show ‘Simply Ballroom’ on its world tour where he performed in South Africa, Dubai, Abu Dhabi and the United Kingdom, including London’s West End.

Dancing aside, it was during his time at both Chilterns & MDDC, he found his passion for Acting & Voice Over. He went on to excel at all levels in his London Academy of Music and Dramatic Arts (LAMDA) & Guildhall examinations in Acting, Drama & the Speaking of Verse & Prose.  Please click here to listen to his voice over reel.

Rob has served as a radio personality, a television host and a master of ceremonies on both sides of the Atlantic. His resume includes corporate events, live auctions, theatre perfomances, television presenting, talk show style interviews, dance conventions & competitions as well as sporting events. Rob delivers his unique personality, quick wit & of course his charming British accent every time he is cast.

Rob first caught the bug of choreography at an early age, it all started within the competitive world of Line Dancing. As a professional dancer himself, Rob is well versed in ballet, tap, modern, jazz, latin, ballroom, american rhythm & smooth, double work (pas de deux) lyrical dance & contemporary in both the Imperial Society of Teachers of Dance (ISTD) and Royal Academy of Dance (RAD) Syllabi.  Additionally, he is skilled in most areas of street dance, including poppin’, lockin’, tickin’ & break dance, all of the swing dance styles as well as the many country couples dances. This training along with his championship titles enabled him to become not only a certified judge in various styles of dance, but have shaped him to become a truly versatile choreographer.

Its all about the performance. Rob has been hired to work with musicians, top athletes & celebrities on such things as concert flow & set list direction, on camera training, interview preparation, competition conditioning, as well as general health & well-being during life on the road or on tour. Rob currently trains both professional & amateur competitive dance couples, formation & show dance teams, as well as training his regular students who he competes with in multiple divisions of Pro/Am. The term “Pro/Am” refers to a professional dancer/instructor dancing with their student. 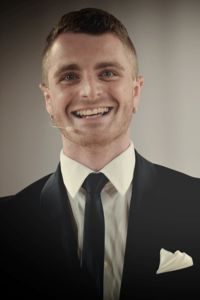