Flore Berne started out as an athlete at a very young age and competed nationally gymnastics competitions from 6 years old until she was 14. Her passion for dancing grew and she trained in Jazz, Rock’n Roll, Salsa as well as Fitness to become a professional dancer. She successfully obtained her Fitness degree in 2006.

She moved to Paris when she was 18 years old to be trained in some of the most prestigious national schools in Jazz and Social Dancing which led her to specialize in social dancing and obtain the ‘Teacher’s diploma’ in Ballroom, International Latin, Rock’n roll and Salsa.

In 2007, she joined the ‘Feeling Dance Show’, one of the most prestigious ballroom/latin companies in Paris. They produced themselves on most big stages and concert halls in France. In the meantime she started training and touring in Europe with William and Maeva, three times world champions in boogie-woogie and her new dance partner Nicolas Deniau (one of the top 10 Boogie-Woogie dancers in the world at this time).

Willing to take it a step further, she started competing in Dance Sport as in international competitor with Philippe in 2009.

Her national breakthrough was the victory of a major French Dance TV Show with her Boogie partner Yann-Alrick Mortreuil which led to major international showcases and starring in different movies and music videos.

She is therefore a qualified teacher and dancer with 10 years of experience!

Philippe comes from the competition world and Flore from the world of social dancing (Boogie-Woogie, Swing, Salsa, West Coast Swing,…), which adds a lot of flow and style to their dancestyle.

They evolved rapidly in national and international competitions and took it to the biggest French stages with Charly Moser’s dance Company (Feeling Dance Show), known for their numerous TV and live appearances.

In 2013, they set their newest challenge: share their passion with the world and move to Montreal , Canada.

Today, they are emerging West Coast Swing Showcase champions, they placed top 4 at the US Open 2017 and top 5 at the Us Open 2016, and placed top 4 at many NASDE events since they started competing in the showcase division in 2014. They are also Canadian Champion 2016 and 2017!

They decided recently to stop compete in Dancesport, to be more present for their students, their pro-am… and to be more available for shows!

They represented several times officially the Canada at the World Ten Dance Championships. 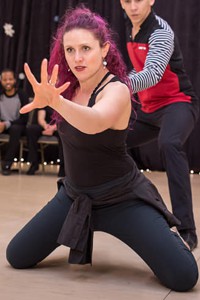